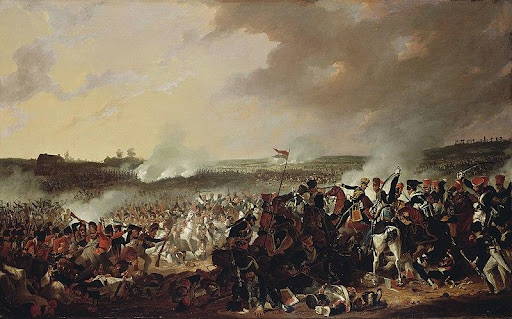 The Battle of Waterloo: General Advance of the British Lines. 1816. Denis Dighton. Courtesy of the Royal Collection

“My heart is broken by the terrible loss I have sustained in my old friends and companions and my poor soldiers. Believe me, nothing except a battle lost can be half so melancholy as a battle won.”

In 1815, war had ravaged through Europe for over two decades as France fought to expand its empire. In March of that year, Napoleon, the imprisoned French Emperor, escaped capture on the island of Elba and returned to France. Gaining an army of followers as he made his way to Paris, Luis XVIII, who had been reinstated as King of France, fled the city, allowing Napoleon to arrive in Paris and take charge, organize his troops, and mount his offensive against the allied forces of Europe.

On March 25 1815, after the news of Napoleon’s escape, a treaty was signed between Great Britain, Russia, Prussia, and Austria that they would maintain 150,000 troops in the field until Napoleon could be defeated once again. By the time Napoleon entered the southern Netherlands (modern day Belgium) on June 15, the Allied armies had formed themselves into two coalitions, the Prussian forces led by Field Marshal Gebhard von Blucher and the Anglo-Allied forces led by Field Marshal the Duke of Wellington. However, by this point the French had forced the two allied armies apart, which was part of Napoleon’s strategy, weakening their position. Both Blucher and Wellington’s forces were attacked by French forces, Blucher’s was defeated, suffered great losses, and retreated. Wellington and his troops were able to hold off the attack, but were also forced to retreat or risk further outmaneuvering. Wellington fell back towards the village of Waterloo.

Waterloo then became the site where the French converged once again with Allied forces. On June 18, the Prussians still had not arrived near Waterloo, but having received intelligence that they were on their way, Wellington decided that his forces would stand and fight. Without knowledge of the Prussian army’s impending arrival, Napoleon held off his offensive attack on Wellington until midday. The attack of the French was fierce and the battle was hard, but due to Wellington’s position on a high ridge and the mid-afternoon arrival of the Prussian forces to reinforce their strength, the Allied Forces gained the advantage. By that evening, Napoleon made one last attempt for victory. He sent in his most elite troops, the Imperial Guard. The guard attacked the front line on the ridge, but the Prussians were able to break through the French right flank and the French army retreated in defeat. Eventually Napoleon abdicated on June 22 and on July 7, 1815, the Allies entered Paris and Luis XVIII was restored to power the next day.

The Battle of Waterloo became the final battle of both Napoleon’s campaign for rule and France’s efforts to expand their empire. Both of Napoleon’s plays for power and dominance waged huge amounts of destruction and violence in Europe. In Britain, the Duke of Wellington and the men who fought with him became heroes for conquering the world’s conqueror. 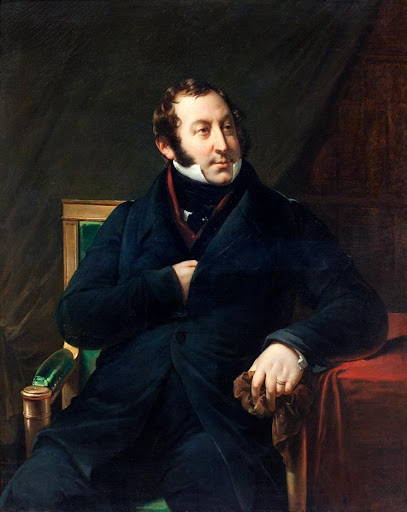 Gioachino Rossini was a very popular and prolific Italian composer of his time. He was born in 1792 in Pesaro, Italy to a trumpet playing father and a singing mother. Rossini started composing at the age of 12 and his first opera was performed in Venice in 1810, when he was 18 years old. Between the ages of 18 and 31 he wrote 34 operas, and in total in his career he composed 39 operas, in addition to some chamber music, piano pieces, songs, and some religious music.

Rossini’s most famous opera was a comedic opera titled, Il Barbiere di Siviglia, or The Barber of Seville. The opera is in two acts and is based on Pierre Beaumarchais’s French play, Le Barbier de Seville, written in 1773 and premiered 1775. Rossini’s operatic interpretation of this play was not the first, but it certainly became the most loved as it spread in popularity from Italy, through Europe, across the Atlantic to the Americas and then around the world. It was the first Opera to be sung in Italian in New York City in 1825.

The barber in the opera is named Figaro, and follows his adventures aiding Count Almaviva in winning the hand of the beautiful orphan Rosina. This is of course against the wishes of her guardian Bartolo. Beaumarchais wrote a second play about Figaro, Le Mariage de Figaro, which inspired another famous opera, The Marriage of Figaro, composed by Wolfgang Amadeus Mozart. Mozart composed this opera 30 years prior to Rossini’s, but because the story follows Rossini’s in sequence, Rossini’s The Barber of Seville is considered a prequel to Mozart’s famous opera.

View a production of the The Barber of Seville here:

Peerage: the titled nobility in Britain

Blue Stocking: an intellectual or literary woman. Often seen negatively in polite society in those times.

Cravat: forerunner of the modern necktie, a neckerchief worn by men, many worn in intricate styles.

Bloodletting: a practice formerly used by doctors/physicians to withdraw blood from patients to prevent or cure illnesses or diseases. The thought was that by releasing the blood, one could balance the “humours” of the body and thereby heal it.

Set her cap at: a person who sets out to gain the affections of another person, usually with the aim of marriage.

Oriel: a bay window that protrudes from the main wall of the building, but does not reach the ground.