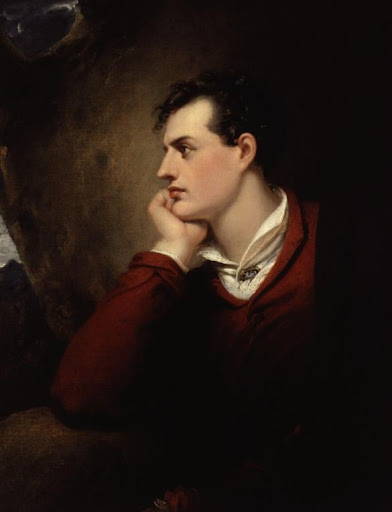 Of cloudless climes and starry skies;

And all that's best of dark and bright

Meet in her aspect and her eyes...”

For those living in the Regency Era, the options available for entertainment were not as varied as they are for us today, though there are some that will always span the divide of time. The written word is a form of entertainment that has entertained and delighted many both in Regency times and today. And one such author who was popular in that era was George Gordon Byron, better known as Lord Byron. He was born in 1788 to army officer, Captain John Byron, and a Scottish heiress, Catherin Gordon. When young Byron was 10 years old, he inherited the Byron ancestral home, Newstead Abbey, from his great-uncle, and became the 6th Baron of Rochdale. Byron was educated at Harrow, a prestigious school for boys, and Trinity College at Cambridge. It was during these years that his talent for writing emerged, but it was also a time when he started a life of pleasure-seeking and revelry which defined him as flamboyant, passionate, and scandalous.

“I live not in myself, but I become

Portion of that around me: and to me

High mountains are a feeling, but the hum

Lord Byron’s widespread fame wasn’t solidified until 1812, when the first two cantos of his narrative poem, “Childe Harold’s Pilgrimage” was published. The work is considered autobiographical and follows the travels of a young man who is dissatisfied with his life of leisure and revelry as he looks for diversions away from home. The subject matter of the narrative is the young man’s thoughts on the beautiful scenery and his melancholy with seeking pleasure and his disillusionment with the world. Byron also traveled extensively and the first two cantos are thought to be based on his experiences in the Mediterranean.

“There is something pagan in me that I cannot shake off. In short, I deny nothing, but doubt everything.”

Despite Byron’s fame, his life was one filled with scandal. He engaged in many affairs and was rumored to have one with his half-sister, as well as actresses, and ladies of the ton. In an effort to assuage his guilt and escape rumor, he married Annabella Milbanke in 1815 in the hopes that she could “reform him.” But the marriage was acrimonious and after the birth of their daughter, Ada, in December 1815, Annabella left Byron in January of 1816 to live with her parents. They were legally separated and with the scandal of his failed marriage, the past rumors of incest and multiple affairs, Byron, having become as wicked as his creation Childe Harold, left England in April of 1816 and never returned. He spent his time in Switzerland, Italy, and Greece and continued to publish his works.

Byron died in Italy in 1824 of a violent fever. Though his popularity had been tarnished by scandal, his poetry and words are beloved the world over today.

“Be thou the rainbow in the storms of life. The evening beam that smiles the clouds away, and tints tomorrow with prophetic ray.” 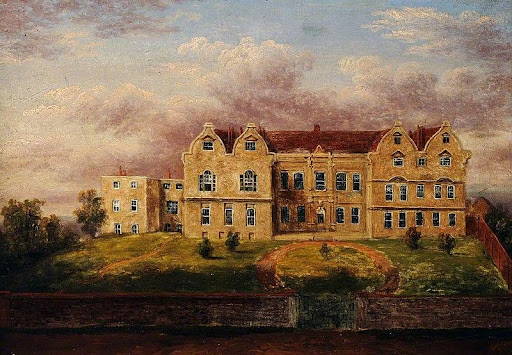 When all the balls and merriment of The Season was over and the heat of the summer was upon London, the gentry and aristocracy would escape to the country for cooler temperatures. In order to continue the social interactions enjoyed during the season, many would hold house parties during the months of August through December. These gatherings would last from a few weeks to sometimes months, depending on the hosts wealth and the guest’s leisure. If your own family didn’t own their own country estate, you would try to get an invitation from a family member or friend, or maybe a young gentleman’s family would invite the family of the young lady he was pursuing during the London season to get better acquainted.

To entertain their guests, many hosts would plan many events and delights for their guests. The latter half of the year was season to grouse, fox, and pheasant hunting and many hunts were organized to entertain the men. Other outdoor amusements included, archery, lawn tennis, croquet, lawn bowling, fishing in ponds, long country walks, and horseback riding. There were also day trips planned to see nearby architectural marvels or natural wonders. Indoor entertainments included letter writing, reading, playing the pianoforte, playing cards, putting on theatrical plays, and many other types of parlor games. And the most lavish of entertainments for the guests were the balls and parties they attended locally or that their hosts held.

Country house parties were a very expensive venture. This was true for both the host and the guest. The host incurred the cost of feeding his/her guests, furnishing them with whatever they would need while there and what they would need for entertainment, and hiring any additional staff.

You may think all the guest had to do is show up, but the houses they were invited to visit were houses of the Gentry and Aristocracy, who were used to opulence and refinement. Guests needed to ensure they were attired in the finest of dresses and clothing, sometimes reacquiring new gowns and clothes be made so they would not show up in the same gowns worn during the season, as that would have been seen as a faux pas. Plus, each different meal and event required different modes of dress for the ladies, which dictated a plethora of clothing be brough with them. The luggage required was immense, and unless their host offered to fund their travel, they would have to pay their way to the house either via their own carriage, or via stage coach. In addition, guests were also expected to pay their host’s servants through vails, or tips. This included the grooms, maids, cooks, or any servant who aided them while during their stay.

For many, the prospect of attending a country house party was just too costly, but if you were lucky or blessed enough you could enjoy many amusements outside of the bustle of the city.