Pinkerton’s National Detective Agency is the world’s first and most famous private security company. Founded in Chicago in 1850 by Allan Pinkerton, the agency quickly established a high-profile reputation for successful sleuthing and ironclad confidentiality. At a time when local police were understaffed, underfunded, and often corrupt, the Pinkerton agency provided individuals and companies with personal security guards, spies, strikebreakers, the first criminal database, and Wild West law enforcement. After Allan’s death in 1884, his sons Robert and William “Bill” Pinkerton continued to run and expand the company. By the 1890s, it had grown to be larger than the U.S. Army. While much of its duties were eventually absorbed into the FBI and official local police departments, Pinkerton still operates today as a private security firm.

Allan Pinkerton made history in many ways, including his willingness to hire women and minorities as detectives. In 1856, he defied social norms and hired Kate Warne, the world’s first female professional detective. Warne became one of Pinkerton’s best undercover investigators because of her sharp wits, extraordinary courage, and effective use of disguises and accents. Just weeks before the start of the Civil War, she helped uncover and foil a plot to assassinate president-elect Abraham Lincoln in 1861 as he travelled to Washington. D.C. for his first inauguration. After news spread through the nation about the Pinkerton detective’s sleepless vigil to protect the new president, the agency adopted the logo of a large unblinking eye and the slogan “We Never Sleep.” This iconic logo inspired the popular nickname for detectives -- “Private Eye.” 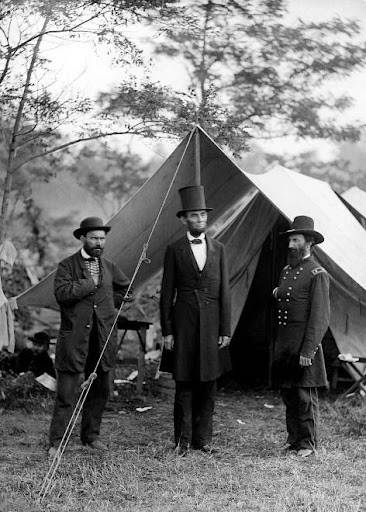 Allan Pinkerton, President Abraham Lincoln, and Major General John McClernand at the Battle of Antietam, 1862. Courtesy of the Library of Congress.

Shinning: scrambling up and down, or moving quickly

Pie poisoning in Kentucky: During the Civil War, a large number of Union soldiers near Louisville, Kentucky, died after eating allegedly poisoned pies baked by Southern women who peddled them to the troops.

Bad egg: a dishonest or untrustworthy person who appears good on the surface

Battle of Antietam: A major Civil War battle fought in September 1862, near Sharpsburg, Maryland. Although it ended in a significant victory for the Union and was a turning point in the war, it was the bloodiest day in American history because of the high death toll on both sides.

New Orleans yellow fever epidemic: New Orleans was plagued by devastating yellow fever outbreaks for decades in the nineteenth century, causing more than 41,000 deaths between 1817-1905. The epidemic was transmitted by mosquitos, which thrived in the city’s stagnant water and lack of public sanitation.

Slumgullion: old Gold Rush slang for an inexpensive meat stew made from leftovers

Absquatulated: decamped, ran away, left abruptly; a mid-1800s term blended from “abscond,” “squattle,” and “perambulate” as part of an odd fad in the 1830s for coining new words that sounded vaguely Latin

Curglaff: archaic Scottish term for the shock felt when one first plunges into cold water