Letter 21 - The Rise of Hitler 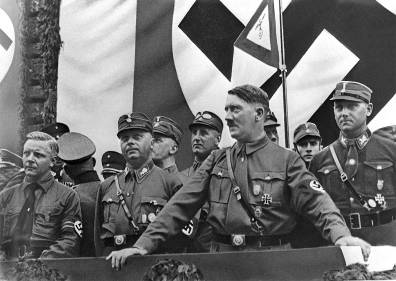 Benjamin Franklin once said, “Either write something worth reading or do something worth writing” (1). Whether that “something” is good or bad is up to the individual. In a study of the most significant figures in history, Adolf Hitler ranks 7th on the list (2). Hitler’s crimes against humanity are well known, but how did he get there? To understand Hitler’s rise to power, we must begin decades before his election to chancellor in 1933.

When Germany began fighting the Great War (WWI) in 1914, Adolf Hitler was a young military man filled with passion for his country. After the Treaty of Versailles forced the surrender of Germany and ended the war in 1919, many German citizens were outraged by the astronomical reparations the treaty had placed upon the battered country. Fueled by this outrage, a locksmith named Anton Drexler formed the National Socialist German Workers’ Party in 1919 (3). Drexler’s party, more commonly known as the Nazis, would provide an outlet for Hitler to voice his passions, just as Lionheart observes in his letter. Historians agree that “Hitler soon emerged as a charismatic public speaker and began attracting new members with speeches blaming Jews and Marxists for Germany’s problems and espousing extreme nationalism and the concept of an Aryan ‘master race’” (4). He assumed control of the party in 1921 after promising young economically disadvantaged Germans a better life under his leadership. Just two years after his takeover of the Nazi party, Hitler led a revolutionary force from a large beer hall into the streets where a gun battle with government forces ensued. Though he fled the scene, he was later arrested and sentenced to five years in prison for treason (5). Though his putsch (German for coup) had failed, his actions and internment would cement him as a prominent national figure. Hitler would only serve nine months of his sentence, but emerged with the first copy of his infamous autobiography, Mein Kampf.

Economic recovery had begun in Germany, resulting in a decline of interest in the extreme right-wing policies the Nazis had to offer. Undeterred, Hitler continued to build support with the upcoming generation and established the Hitler Youth organization (5). The seeds he continued to sow among the youth would blossom to his full advantage when the global economic freefall of 1929 (The Great Depression) decimated the progress of recovery that Germany had managed. Hitler’s Nazi party quickly dominated local and state elections. Hitler ran for president in 1932 and lost to Paul von Hindenburg, but had garnered nearly 37% of the vote in the process. Just one year later, Hitler would convince Hindenburg to appoint him as Chancellor. Elections for the Reichstag (the German Parliament) would take place two months later where the Nazi party would control 44% of the vote.

With the appointment of Chancellor and nearly 50% of the Reichstag behind him, Hitler ensured the passage of the Enabling Act in March of 1933, “Which ‘enabled’ Hitler’s government to issue decrees independently of the Reichstag and the presidency; Hitler in effect assumed dictatorial powers” (3). By July of the same year, The Nazis had passed an additional law banning all other political parties in Germany. When President Hindenburg lay on his deathbed in 1934, the Nazi party would pass a secret law that would abolish the office of president and channel all power to the Chancellor whose title would become the Führer (German for leader). Just two hours after Hindenburg’s death, Hitler would announce the new law and assume control as the absolute leader of Germany.

We hope that reading this post will help our readers understand why so many fought for freedom and liberty in WWII. As such, we hope that all people continue to promote liberty, democracy, and freedom from oppression.