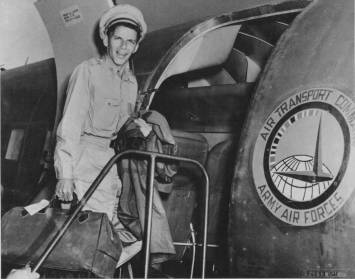 Do you remember the last time you were on an airplane? With COVID-19 still present throughout the world, it’s probably been a while. Think back to the last flight you were on. You probably wore some form of sweatpants and were not amused at the small coffee and snack offered during the flight. In a matter of hours, you traveled hundreds of miles in the clouds, 38,000 feet above the ground. The person next to you snored the whole way and you were too cold. It was nothing to write home about.

Many of us have probably had a similar experience flying in today’s world, but before WWII, flying in an airplane was a serious novelty. The Wright brothers took the world’s first flight in 1903, ushering in the next generation of travel (1). Commercial flight became a reality in the United States when Congress passed the Air Commerce Act of 1926. According to the Federal Aviation Administration, The Air Commerce Act “Charged the Secretary of Commerce with fostering air commerce, issuing and enforcing air traffic rules, licensing pilots, certifying aircraft, establishing airways, and operating and maintaining aids to air navigation” (2).

At the onset of WWII, just 360 commercial passenger aircraft were in operation across the United States (3). Military leaders quickly realized the dire need for air transportation to aid in the war effort. With almost all of the commercial airlines being operated by reserve members of the military, America’s commercial airplanes stopped general service and volunteered the fleets for the war effort starting in 1942. In order to accommodate this unique partnership, The Air Force formed the Air Transport Command, or ATC. The ATC would become an enormous international airline operated by the military, tasked with the safe transportation of people, craft, and cargo across the world (3).

The most famous division of the ATC was the Women Airforce Service Pilots, or WASP for short. With a shortage of male pilots across the homefront, these brave civilian women pilots stepped up to the call of duty. Susan Stamberg of NPR reports, “A few more than 1,100 young women, all civilian volunteers, flew almost every type of military aircraft — including the B-26 and B-29 bombers — as part of the WASP program. They ferried new planes long distances from factories to military bases and departure points across the country. They tested newly overhauled planes. And they towed targets to give ground and air gunners training shooting — with live ammunition” (4). The program only lasted for two years, and the WASPs were not recognized for their incredible military service until the 1970s. General Henry “Hap” Arnold would congratulate the WASPs for their outstanding service at their last graduation ceremony, saying he didn’t think “whether a slip of a girl could fight the controls of a B-17 in heavy weather . . . Now . . . it is on the record that women can fly as well as men” (4). President Obama would recognize their contribution to the world and award the WASPs the Congressional Gold Medal in 2010.

The ATC operated throughout the world, with service to the South Pacific, Asia, South America, Africa, the Middle East, Europe, and Australia. One of its most daunting feats was delivering supplies across the Himalyan mountain range without the aid of navigation equipment (5). The aid of the ATC cannot be overstated. Through its service, millions of pounds of cargo would travel across the world including airplane engines, trucks, food, ammunition, troops, and more. Its service continued through the duration of the war, right up to the surrender of Japan in 1945. The Smithsonian reports that, “In its last full month of operation alone, the ATC delivered 100,000 tons of cargo and transported 275,000 high-value passengers, particularly VIPs and wounded servicemen, with most on overseas flights” (3). President Harry Truman discontinued the ATC shortly after the war ended. By the end of its service, the ATC had accumulated over 3,700 aircraft and 320,000 personnel.

Members of the ATC are some of America’s most incredible unsung heroes. Without their service, some of the most important battles in the history of mankind could not have taken place. Millions of servicemen and women were returned safely to their families throughout the course of the war. Thanks to the remaining infrastructure of the ATC, commercial flight exploded after the war into how we know flight today. So next time you shuffle your way onto an airplane to travel the world, stop and consider those brave members of the ATC that paved the way for all of us to take to the skies.