It may sound like such a trifling thing when so many lives were on the line, but knitting contributed a great deal to the war effort, and it was a way for everyday American women to help not only U.S. Troops, but besieged Londoners before the Japanese even bombed Pearl Harbor in December 1941.

From 1941-1945 there was a whole lot of knitting going on. First Lady Eleanor D. Roosevelt led the way, rarely being seen without her knitting bag under her arm. Ladies’ magazines of every sort including the prestigious Life magazine joined in the effort, encouraging American women with not only providing them with instructions on how to knit, but providing them with knitting patterns to help them along their way.

In our letters, Audrey Rose portrays one an American woman who is trying to do her best to join the knitting effort, but despite her own best efforts is really struggling to pick up the craft. Which we personally can totally relate to. ;-)

Here is a great article from HistoryLink.org that goes more into detail on the WWII knitting effort

And another on WWII knitting propaganda by The Center for Knit and Crochet: 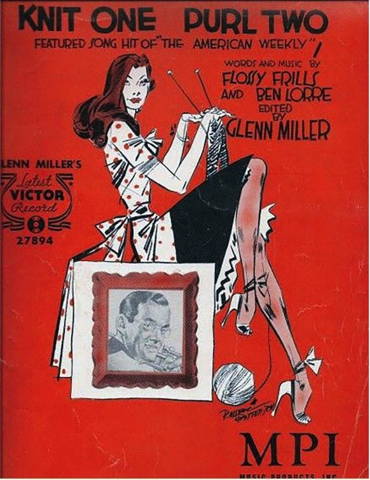 Leslie R. Groves: Was a Lieutenant General in the US Army during WWII and the director of the Manhattan Project, which was the project that led to the invention of the Atomic Bomb.

Captain Jack Churchill: We came across a lot of interesting stories and real-life characters during our research for the Audrey Rose collection, but none were more fascinating than Captain Jack Churchill. Which is why we couldn’t help basing Ruby’s love interest Captain Jack Cameron on him. John Malcolm Thorpe Fleming Churchill was a Scottish born soldier in the British Army. He was feared by the Nazis for his very precise long bow skills and would never enter battle unless accompanies by his bagpipes, longbow, and sword claiming that “Any officer who goes into action without his sword is improperly dressed.”

Take a look at this article to learn more about this very interesting fellow.

CIP Agents: The Corps of Intelligence Police. A United States Intelligence agency founded in 1917 by Colonel Ralph Van De Man. Much of the intelligence techniques used by CIP Agents broke ground and paved the way for espionage technique used by the CIA today.

Ralph Van De Man: The United States Colonel who founded The Corps of Intelligence Police and sometimes referred to as “The Father of American Military Intelligence.” He created the CIP due to the United States concern over the possible threat posed by German spies during WWI.

Battle of Amiens: (August 8-11, 1918) The opening phase of the Allied offensive that began the Hundred Days Offensive and eventually led to the end of WWI.

Spanish Influenza: An unusually deadly influenza strain that led to the deaths of 50 million people during the worldwide pandemic which lasted from 1918-1920.

Pandemic: An epidemic of infectious disease that has spread across a large area, such as multiple continents, or the entire world.

First and Second Wave: There were three different waves of the Spanish Influenza pandemic of 1918-1920. The first wave began in 1918. The pandemic peaked in the U.S. during the second wave in the fall of 1918 and was responsible for most of the deaths in the United States. The third wave occurred during the winter and spring of 1919 and finally subsided during the summer of 1919.

“Dearly Beloved”: a 1942 song written by Johnny Mercer and Jerome Kern, introduced by Fred Astaire in the film You Were Never Lovelier.