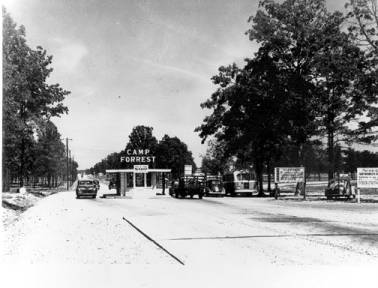 The first letter in the Audrey Rose Collection is written by Charlie while he is training as an Army Ranger at Camp Forrest in 1943. While the characters are fictional, the events and places they write about are very real. Not much is mentioned about Camp Forrest in Charlie’s letter, but it played a significant role during the war.

Shortly after declaring war on Germany, the US federal government approved $13 million and 40,000 acres for an army training facility outside Tullahoma, Tennessee that would be known as Camp Forrest. By the end of the war, the facility cost the US $36 million and covered 78,000 acres with 1,300 buildings and 55 miles of roads (1).

Camp Forrest provided critical training for military personnel throughout the war. According to the United States Air Force (USAF), over 45 different battalions and groups were trained at the camp, including Major General Patton’s 2nd Armored “Hell on Wheels” division (4). Among the training that took place was for Army Rangers, such as our own Charlie Burke. This type of training was grueling and aimed to produce only the best of soldiers. Along with providing training, Camp Forrest also served as a recruitment facility and provided the initial physical examination for over 250,000 servicemen (5).

At the conclusion of the war, the military deemed the facility as “surplus” and sold everything but the land. Eventually, the USAF repurposed the land and built the Arnold Engineering Development Center that is still in operation today. All that remains of the camp are the memories of those who worked, trained, or were detained there (6). Though Camp Forrest exists only in memory, its contribution to the war effort will not be forgotten.

2. For more information about “alien civilians”, see our post about US internment camps.