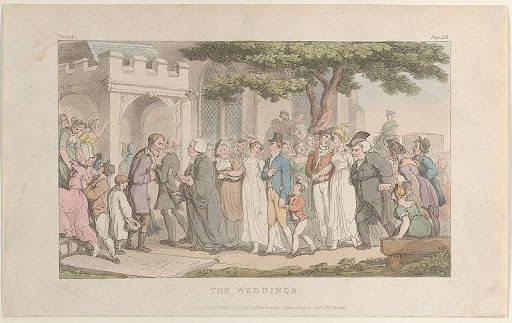 “The Weddings”, from The Vicar of Wakefield by Oliver Goldsmith. Art: Thomas Rowland 1817. Courtesy of TheMet

Regency Era weddings in England were rife with traditions. Women were not able to own property in that time, so when a woman married, everything she brought with her into a marriage became the property of her husband. Her fiancé and her guardian, usually her father, would negotiate a marriage contract or settlement. This contract would state what her dowry would be, or the amount of money set aside as her “portion” that would be given to her husband on their marriage. The contract also would include reached negotiations on how much “pin money” or annual allowance the wife would receive for her personal needs, details regarding her finances in the event of her husband’s death, and sometimes details regarding financial provisions for any future children; like dowry portions for daughters or inheritances for sons.

Once financial settlements were reached preparations for the wedding commenced. First, the couple needed to ensure they attained either a marriage license, or had their banns read in church. If they chose to have their banns read, this needed to occur during services three Sundays in a row and they could get married on that third Sunday. If they didn’t want to wait two weeks for the banns to be read, they could purchase a special license, but still had to be married in their home parish. A Special License could be obtained for a more substantial fee from the Archbishop of Canterbury in London if the couple wished to get married quickly and outside of a church, but this option obviously was only available to the very wealthy.

The bride also needed to think about her trousseau. A bridal trousseau was a collection of clothing and accessories that a bride assembled to prepare for her wedding and her new role as a wife. Sometime a trousseau also included household linens and treasured belongings such as jewelry. Many items were collected through her life, but others, like the clothing, were purchased in the weeks leading up to her wedding. These would include undergarments, stockings, shoes, morning dresses, afternoon dresses, walking dresses, ball gowns, riding habits, carriage/traveling dresses, cloaks, shawls, gloves, pelisses, hats, bonnets, and of course her wedding dress. Not all regency brides had a special dress made for their wedding, but if the bride was wealthy the odds were that she did. Many brides did wear white, but only because that was a popular color for evening gowns. The idea was to have an elegant dress in a pale color made for her wedding gown, which could be worn again. To have a dress made of white Indian Muslin would have been seen as the height of gentility as the fine fabric was quite a luxury and only the most discerning would dare to wear it as it required much care if soiled.

The ceremony itself almost always took place during the morning in the Parish church of either the bride or groom. The marriage vows came directly from The Book of Common Prayer, and were required to be used to make the marriage legally and spiritually binding. After the vows were made, communion was administered, and then the clergyman performing the ceremony would take the opportunity to offer a sermon, read scripture, and say prayers. The couple would then sign the registry and the ceremony would be over. There is no part in The Book of Common Prayer allowing for a kiss or introducing the newly married couple to the audience.

Whether it was a wedding breakfast, bridal feast, or banquet, there was almost always a celebration following the ceremony which involved food, wince, entertainment and cake. Cake is a long-standing tradition for celebrating weddings, and cutting it and sharing it with guests would always be included as part of the festivities. Entertainment could include a piano player, a small orchestral group, or even a large choral group. If the celebrations were planned to last for a while, dancing would also be involved. Weddings of people of importance or wealth sometime included formal balls, providing their guests with more formal entertainment. But no matter the entertainment or the social class of the bride and groom, there was almost always a toast to the happy couple wishing them joy and good fortune for their future. 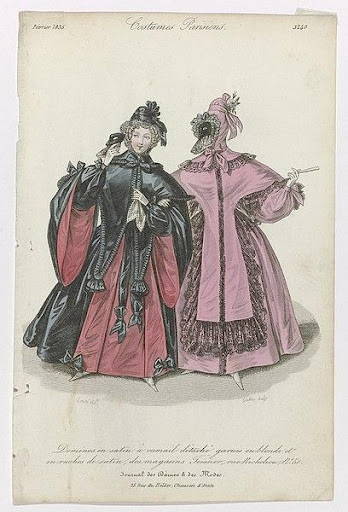 Masquerade balls were balls where attendees would wear costumes with masks. In the 15th century, Masquerade balls originally were part of the celebration of Carnival, a Catholic celebration occurring before Lent. By the 17th and 18th centuries the popularity of these masked balls became popular throughout Europe and by the early 18th century these fashionable social events landed in England. It heightened the excitement of a ball to allow the attendees a night to be someone else and to possibly hide their identity.

Costumes for these events varied. A simple costume was called a domino, which consisted of a black mask, covering either half or the entire face, and was sometimes accompanied by a black cloak or shawl. Dominos could be worn over the wearers regular ball attire and did not require much forethought or planning.

On the other side of the costume spectrum, some balls could have themes with elaborate costumes required of its guests. These costumes could be worn with or without a mask. Occasions such as this would allow for imaginations to fly and for gentlemen to dress as ladies, or for ladies to dress as gentlemen, or for either to dress as animals, queens, kings, gods, goddesses, or as Julianna discussed in her letter, fairies. Masquerades were very festive affairs and a great way to bring people together.

Tylwyth Teg: the most common Welsh term for fairies

Acts of Union: Laws in Wales Acts 1535 and 1542, passed during the reign of Henry VIII to make Wales part of the Kingdom of England

For a brief introduction of Spenser’s The Faerie Queene given by Dr. Jonathon McGovern watch here: