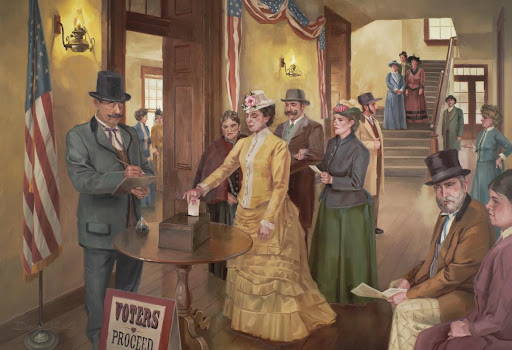 This mural, on display in the Utah State Capitol Building, depicts Seraph Young casting her historic first vote in 1870. Seraph made history as the first woman in the nation to vote under an equal suffrage law, just two days after Utah women gained the right to vote. Courtesy of Utah State Capitol Collection.

Voting and Vaudeville in Early Utah

On a cold Valentine’s Day morning in 1870, a 23-year-old schoolteacher named Seraph Young entered Salt Lake City’s Council Hall on her way to school and made history as the first woman in the United States to cast her vote under an equal suffrage law. It was the opening of a new political era, and a sign that life was changing in Utah and the nation.

During the final decades of the Nineteenth Century, new railway connections were transforming life in Utah, connecting the remote territory with the rest of the nation in unprecedented ways. At the time, the vast majority of Utah’s population were members of the Church of Jesus Christ of Latter-day Saints, who had first settled in Utah beginning in 1847 as they fled religious persecution and sought refuge in the isolation of the intermountain west. The arrival of the Transcontinental Railroad eroded this isolation. An influx of new settlers arrived in urban centers like Salt Lake City as well as booming mining towns like Frisco. This shifting population escalated political, economic, and cultural opportunities as well as tensions.

The expansion of professional and political opportunities for women citizens was a hallmark of life in Utah at this time. In an effort to preserve the self-sufficiency of their community and survive the challenges of frontier life, Latter-day Saint women were encouraged by church leaders to take a more public role than was generally available to women in America’s Victorian-era “cult of domesticity.” By the time the Transcontinental Railroad was completed in 1869, Utah women had already begun working as doctors, lawyers, accountants, and shopkeepers and were poised to enter the political sphere in dramatic ways.

In February 1870, the Utah Territorial Legislature made national headlines by passing a Woman Suffrage Bill granting the right to vote to women, just weeks after Wyoming Territory passed a similar equal suffrage law and became the first in the nation to equalize voting rights for women. Because Utah’s next election occurred well before Wyoming’s elections that year, Seraph Young and other Utah women hold the honor of being the first to vote under an equal suffrage law.

For the next seventeen years, Utah women enthusiastically exercised their right to vote and enjoyed political power and influence that most other women in the nation could only hope for. Then, in 1887, Congress revoked the right to vote of all Utah women. This disenfranchisement by national leaders sparked outrage within Utah, and thousands of Utah women mobilized in a widespread grassroots movement to regain their right to vote. Their efforts were so successful that when Utah became a state in 1896, they successfully secured women’s equal right to vote in the new state constitution. Throughout this process, Utah women played a uniquely prominent role at the forefront of the national women’s rights movement and, even after regaining their own right to vote, Utah women continued to advocate for voting rights for women throughout the nation until the passage of the Nineteenth Amendment in 1920.

To learn even more about Utah’s unique and trailblazing role in the early women’s suffrage movement, check out www.utahwomenshistory.org. 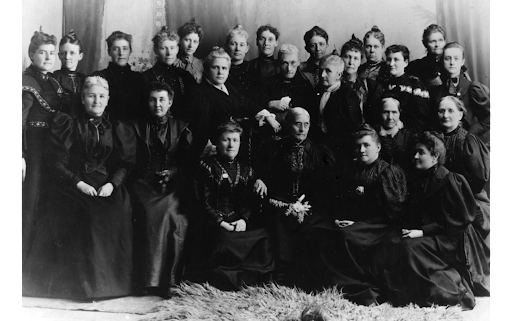 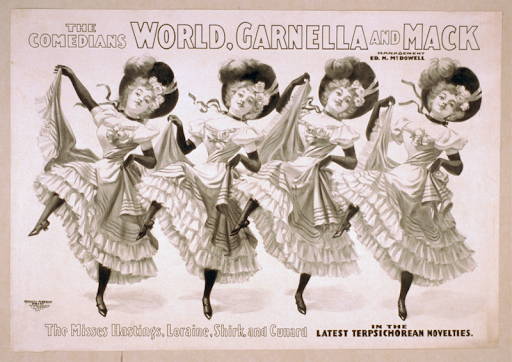 Theatrical poster for a vaudeville show featuring Can Can dancers, 1898. Courtesy of Library of Congress

Vaudeville: In Utah, theater had been an important part of social life since the early days of the Territory. The Deseret Musical and Dramatic Association was formed as early as 1850. Small theaters and social halls provided entertainment throughout the territory, and in 1862 the Salt Lake Theatre opened and soon became part of the national theatrical circuit. With the coming of the railroad, theatrical trends such as vaudeville shows increasingly found their way to Utah.

Vaudeville was a new form of entertainment sweeping across the United States and Canada by the early 1880s. This new theatrical genre featured traveling companies of entertainers who performed variety shows that included singing, dancing, musicians, acrobatics, poetry, magicians, drama, and other novelty acts. Vaudeville’s widespread popularity extended across geographic and economic divisions. Local theaters throughout the Territory featured vaudeville shows, and the opening of the Orpheum Theater in Salt Lake City in 1905 provided an established venue for high quality vaudeville in Utah. As one of the most popular types of entertainment up through the 1930s, vaudeville has been called the “heart of American show business.”

Greenhorn: A novice or beginner, someone who is new, inexperienced, and naive.

Rococo: An elaborately ornamental late baroque style of decoration prevalent in 18th-century Continental Europe, with asymmetrical patterns involving motifs and scrollwork. In the 19th century, the term was used to describe architecture or music which was excessively ornamental.

Can-can: A physically-demanding style of dance involving high kicks, splits, cartwheels and other high energy moves. It first became popular in France in the 1830s and 40s and was introduced in the United States in 1867. Although considered controversial and scandalous during the Victorian era, it gained lasting popularity in dance halls and continues today as a famously iconic dance.

Mormon: A commonly-used nickname for members of the Church of Jesus Christ of Latter-day Saints, an American religious movement established by Joseph Smith Jr. in 1830. The nickname was originally a derogatory label used to reference to Latter-day Saints’ belief in an additional book of scripture, called The Book of Mormon: Another Testament of Jesus Christ. While members of the Church of Jesus Christ eventually adopted the term to describe themselves, in recent years there has been renewed emphasis on using the church’s official name.

Women’s Rights Movement: The nineteenth-century women’s rights movement focused primarily on obtaining voting rights for women. The first wave of this reform movement is generally considered to have begun with the first official women’s rights convention in Seneca Falls, New York in 1848 and lasted until the passage of the Nineteenth Amendment in 1920.

Lucretia Mott: A leader within the early abolition and women’s rights movements. Because her Quaker religion emphasized the equality of all people, she devoted her life to speaking out against racial and gender injustice. During the early- to mid- 1800s, at a time when it was often not socially acceptable for women to speak in public, she became a strong advocate for women’s voting rights and the end of slavery. She was one of the founders of the Philadelphia Anti-Slavery Society in 1833, one of the organizers of the first women’s rights convention in 1848 at Seneca Falls, and the first president of the American Equal Rights Association beginning in 1866.

Pistol Whipping: Also known as “buffaloing,” this term refers to striking someone with a handgun. It was a common way to incapacitate someone in the 19th century Wild West, and was often used by Wyatt Earp and other frontier lawmen and bandits.

Specter: A ghost, phantom, spirit, or apparition; something that causes fear or worry.

Corker: Something or someone that is particularly excellent, remarkable, or outstanding; slang for “something astonishing” in the 1880s.

Mephistophelean: Wicked, fiendish, diabolical, evil, demonic, monstrous. It is a reference to Mephistopheles, a demon from German folklore who worked on behalf of the devil. Originally appearing in the literary legend of Faust, the character of Mephistopheles convinces Faust to sell his soul.