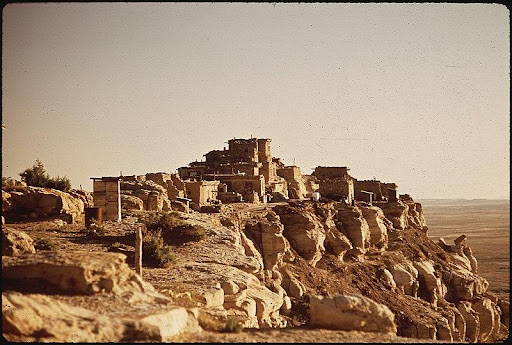 Ancient Hopi village of Walpi, built into the red rock cliffs of First Mesa. Courtesy of National Archives and Records.

For thousands of years, an advanced native culture of peace, ritual, and prophecy has flourished in the Four Corners region. Sometimes known as “The Oldest People,” Native Americans from the Hopi Tribe trace their roots to the Ancestral Puebloans and include the oldest continuously-inhabited settlement in the United States. Perched on the steep cliffs of three mesas in northeastern Arizona, the pueblo homes of the twelve Hopi villages stand apart both physically and culturally.

Members of this agricultural tribe believe they are the earth’s caretakers. A deeply religious people, they have long worshiped hundreds of deities called Katsinas, or Kachinas. Their complex mythology includes Hopi legends about the cyclical creation of worlds and the tribe’s role in the end of this world, which they consider to be the Fourth World that has been inhabited by the Hopi. According to Hopi prophecy, the eventual arrival of the Blue Star Kachina and Red Star Kachina will usher in a Day of Purification, where the wicked will be judged and destroyed. The faithful Hopi, however, will be protected in underground caves until the return of Pahana, the “Lost White Brother” who will come wearing red and usher in the peaceful Fifth World. These apocalyptic legends, preserved by oral tradition, share striking similarities to legends of other cultures, including the Aztec belief in Quetzalcoatl. Ceremonial Hopi rituals feature kachina masks and costumes, as well as elaborately-carved Kachina dolls to teach about Hopi customs and beliefs.

The Hopi call themselves “Hopituh Shi-nu-mu,” meaning “Peaceful People,” and this peacefulness has enabled them to preserve their traditions and culture even in the face of outside encroachment. Hopi culture continues the mandate of Maasawu, the Earth God who gave them stewardship over the land, to strive for harmony with nature and reverence for all things.

Texas Rangers: a public safety division originally established in 1823 to provide law enforcement for the state of Texas. It features prominently in Texas history and the criminal history of the Old West, including the capture of famous outlaws such as John Wesley Hardin and Bonnie and Clyde.

Papoose: an English term historically meaning a Native American child or the cradleboard carriers used by some Native American women to carry their children. The term is now considered offensive by some tribes.

Wampum: highly-valued shell beads formed into cylindrical tubes and strung together in strings and belts; used by Native tribes in the coastal northeast to record histories, treaties, and ceremonial pledges, and to indicate authority and serve as currency. 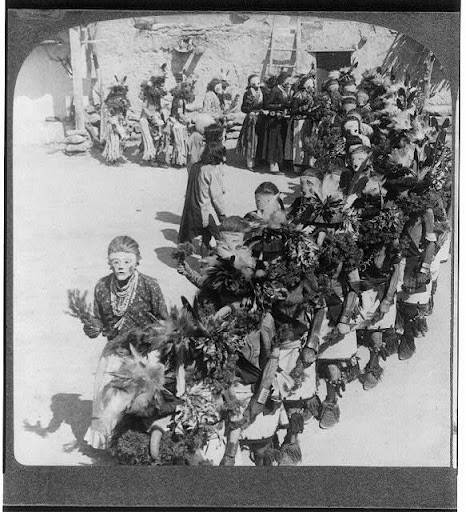 Masked Kachinas during a ceremonial rain dance in the Village of Shonghopavi, Arizona, ca. 1903. Courtesy of Library of Congress. 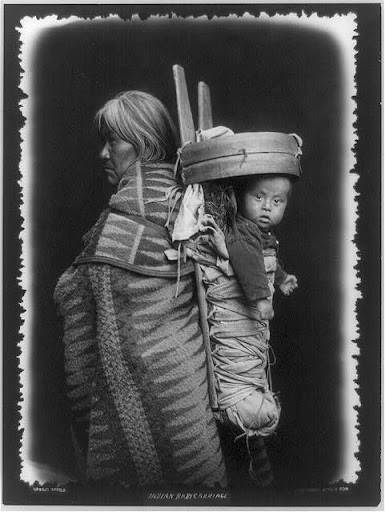 Native American woman carrying her child on her back in a cradle board baby carrier, ca. 1914. Courtesy of Library of Congress.