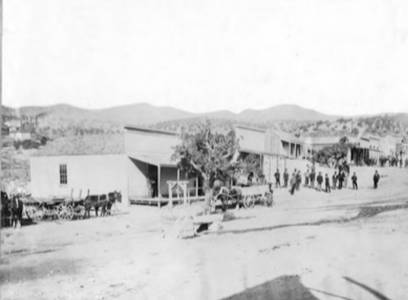 The boom town of Frisco, 1880, with the mine, kilns, and smelters in the background. Courtesy Utah State Historical Society.

The Horn Silver Mine was the making of Frisco and the town’s undoing. By 1885, Frisco had exploded into a thriving boomtown with a population of over 6000 and a mine that had gained fame as “unquestionably the richest silver mine in the world.”(1) Then everything changed overnight.

Just after midnight on February 12, 1885, as the night shift fortuitously resurfaced, tremors started to shake the ground. Suddenly, the mine collapsed down to the seventh level, closing off the main shaft and blocking the richest veins in the mine’s tunnels. Over 10 miles away, the town of Milford felt the tremors powerfully enough to break window panes, tremors resulting either from the mine’s collapse itself or more likely from an earthquake that caused the collapse.

It was unquestionably a “serious disaster,” as the newspapers reported, but fortunately the day crew hadn’t yet entered the mine so there were no casualties – except the mine operations and eventually the town itself. The collapse proved to be the beginning of the end for the town of Frisco. Despite efforts to resurrect the mine by clearing tunnels and resuming production a year later, the population dropped to 500 by 1900, and 150 by 1912.(2) As miners increasingly moved to nearby Milford, the once-vibrant Frisco ultimately suffered the same fate as so many other boomtowns that dwindled into ghost towns.

While the cave-in was catastrophic for the town, it was not necessarily a surprise. In the days following the disaster, the manager of the Horn Silver Mine described the collapse as “long dreaded and expected.”(3) Recent rain and snow had soaked the insufficient timbers, which had been too hastily built. Mine operators had cut too many corners to adequately support the maze of tunnels. The manager, Major H.C. Hill, implied that the poor timbering of the mine was known and that the risks were understood but unaddressed. If proper engineering and sufficient support beams had been used, the disaster that caused the fall of Frisco might have been averted. 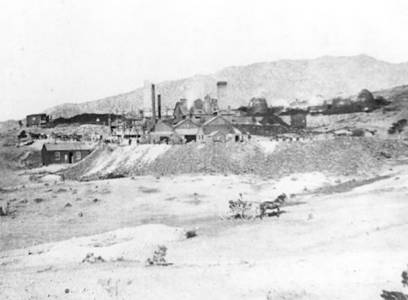 The Horn Silver Mine and smelters, mid-1800s prior to the mine’s collapse. Courtesy Utah State Historical Society.