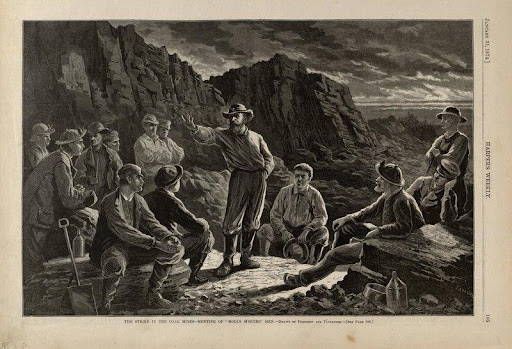 In the coal mines of nineteenth-century Pennsylvania, a violent drama played out that still remains shrouded in mystery and tragedy. The longstanding conflict between miners and mine owners resulted in bloodshed on both sides. It culminated in the unsubstantiated public execution of twenty men who were suspected members of the Molly Maguires, a vigilante secret society originating in 18th century Ireland.

After fleeing Ireland during the Great Potato Famine and settling in the coal fields of Pennsylvania, thousands of Irish immigrants struggled for survival in the wake of the Civil War. These miners faced deadly working conditions, overcrowded housing, and pervasive discrimination based on their Catholic religion and national heritage. Violence erupted between miners and mine owners throughout the 1870s, particularly after the devastating economic depression caused by the Panic of 1873.

The Workingmen’s Benevolent Association, an early labor union for coal miners, organized a series of unsuccessful strikes in the late 1860s and early 1870s to improve conditions. Because of anti-Irish sentiment, many Irish miners also banded together as members of the Ancient Order of Hibernians, a fraternal organization focused specifically on helping Irish immigrants. But as conditions became more desperate, some miners resorted to a more vigilante approach. The law-abiding Ancient Order of the Hibernians has long been suspected of being used as a front for the more violent activities of an American offshoot of the Molly Maguires.

Pinkerton detectives were hired by mine owners to identify the Molly Maguires and bring them to justice. Pinkerton detective James McParland claimed to have infiltrated the secret society and, based on his testimony alone, the accused men were sentenced to death. Lacking any direct evidence to support the rulings, historians continue to debate the validity of the court proceedings and whether the Molly Maguires ever even existed as an established organization in the United States. Were the Molly Maguires murderers or martyrs? One thing is certain—the conflict illuminated a deepening divide between the nation’s working class and those who profited from their labor.

Draft Riots of 1863: In July 1863, as the nation grappled with Civil War, the most deadly and destructive race riots in U.S. history broke out on the streets of New York City. Triggered by working-class men protesting a new law drafting them into military service, the riots began with violence against government buildings and wealthy business owners but quickly shifted to targeting African-Americans. The Emancipation Proclamation had taken effect just a few months before, and tensions were high as white Irish immigrants feared losing their jobs to newly freed slaves. The conflict escalated from destroying black homes and businesses to beatings, lynchings, and even burning the “Colored Orphan Asylum” to the ground (thankfully all the children were rescued in time). The five-day assault resulted in hundreds of deaths, thousands of black families left homeless, and millions of dollars of damage.

Homestead Act: The 1862 Homestead Act was one of the most important pieces of U.S. legislation ever passed. Signed into law on May 20, 1862 by President Abraham Lincoln, the act granted Americans the opportunity to claim 160 acre plots of free federal land. The Homestead Act offered average citizens – including freed slaves, women, and immigrants—access to unprecedented land ownership and economic opportunity. Yet it simultaneously displaced countless Native Americans and was subject to rampant fraud. Despite its many complexities and challenges, the Homestead Act accelerated western expansion and transformed the development of the nation. 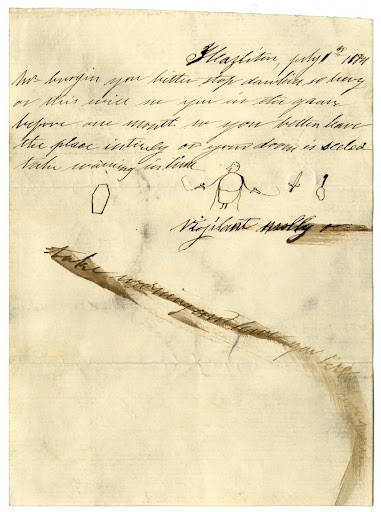 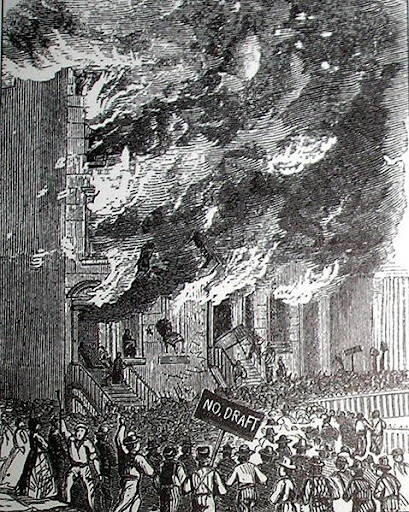 Rioters attacking a building on Lexington Avenue during the New York Draft Riots of 1863.

Courtesy of Library of Congress.