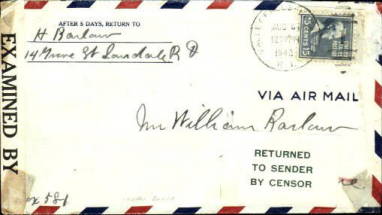 It can be hard to imagine having personal correspondence censored by the government today, but in the throes of WWII, postal censorship was a necessary and essential practice for all military participants in the war. Even the smallest reference to a military operation, a battalion’s whereabouts, or understanding of enemy forces could prove deadly in the wrong hands. Mail both to and from the United States and her allies was censored during the war. According to the National Archives, postal censorship was implemented to “deprive the enemy of information, as well as tangibles such as funds and commodities. [And] to collect myriad intelligence that [could] be turned against the enemy” (1). The US was very wary of letting any information get into the wrong hands, fearing the safety of its soldiers and citizens alike.

Postal censorship first came to prevalence during the involvement of the US in WWI, though there are some instances of postal censorship during the Civil War (2). The American Experience at PBS published an interview from 2000 with Myron Fox, the former Vice President of the Military Postal History Society. In the interview, Fox discusses several fascinating aspects of postal censorship that took place in WWII. When asked what the censors looked for as they examined letters, he describes the most important items to be censored were the soldier’s location, the number of men on the battlefront, and any weakening of desire in the troops (3). While the location and number of troops is easily seen as strategic information, the weakening desire of troops may come across as a surprise to some. Fox explains that the mention of low morale could motivate attacks by enemy forces as well as spread worry and concern at home.

Along with strategic censorship during the war, there are also examples of postal censorship due to moral reasoning. Fox continues in his interview to discuss a discovery of confiscated letters from the war at the National Archives in Maryland. Many of the discovered letters were found to have no strategic information. Instead, they often contained graphic discussions of sex (4). While moral censorship was not as common, it is important to note that it did take place during the war.

In the United Kingdom, the censorship of the press was extremely important to the war effort. Press agencies were required to submit any publication with mention of military operations to the Ministry of Information for final proofing and/or censoring. Failure to comply with the recommendations of the Ministry could result in prosecution(5). According to the National Archives of the United Kingdom, “On 30 September 1945 all censorship operations in the United Kingdom ceased, except those in respect of correspondence of enemy prisoners of war” (6). At the conclusion of the war, many of the UK’s 10,000 censors were laid off or transferred to different positions throughout the military.

Upon learning about postal censorship, you may be left wondering what happened to the Constitution’s First Amendment right of free speech. WWII would not be the first time that concerns of free speech during wartime were brought up. In 1919, shortly after the end of WWI, the Supreme Court of the United States unanimously ruled in Schenck v. United States that “[w]hen a nation is at war, many things that might be said in times of peace are such a hindrance to its effort that their utterance will not be endured so long as men fight, and that no Court could regard them as protected by any constitutional right” (7). In essence, the rights of free speech could be restricted during times of war. President Roosevelt would refer to this court decision when he created the Office of Censorship at the onset of US involvement in WWII (8).

The topic of free speech has become a hot-button issue in recent years with the widespread use of social media and subsequent censorship of individuals across internet platforms. While the US is not currently involved in any major wars, censorship is still taking place in many forms, for better or for worse (9). Regardless of your political affiliation, postal censorship of times past is a relevant topic to study and consider in today’s world of social media and internet platforms.