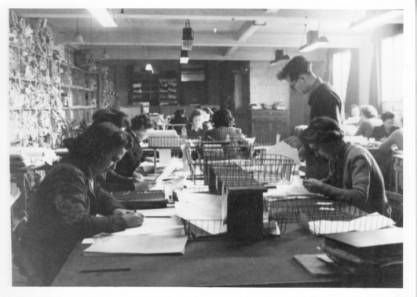 Codes were an essential aspect of WWII. When you think about codes being used in the war, your mind might take you to the popular 2014 movie, The Imitation Game, starring Benedict Cumberbatch and Keira Knightley (1). The movie focuses on the work of British ally Alan Turing during WWII and the brilliant minds that finally deciphered Hitler's Enigma machine. Turing's work completely changed the outcome of the war, giving the ally's a major advantage; however, the codebreakers' work was not as heavily relied on as you might imagine. Intelligence gathered from codes during the war were eventually referred to as Ultra (2). Though allied forces had cracked the German's code, They were fearful to engage a major response to a coded message; an action that could prompt the enemy to change the code and invalidate the work that had already been done to decipher the German's plans.

The Allied understanding of the Enigma code was a highly guarded secret. Just two decades before the onset of WWII, the world was engulfed in WWI, a war that was frequently referred to as "The war to end all wars" (3). With Germany at the center of enemy nations in both wars, there was legitimate fear among allied forces that German forces could someday strike again. It was for this purpose that the allies' understanding of Enigma was not revealed until several decades later (4).

It wasn’t just the Germans that utilized codes during the war. Shortly after the attack on Pearl Harbor, the United States engaged in a brutal war on the water with Japan, commonly known as the “Pacific War” or “Pacific Theater” (5). The Japanese had created their own secret code to communicate battle plans and invade island after island in the Pacific, leaving allied forces helpless. With Pearl Harbor still reeling from the attack months previous, the little Pacific atoll of Midway (2.4 square miles) was the last defense of the United States from Japanese enemies. Japanese forces quickly made a plan of attack to invade Midway and crush the US in the Pacific. Thankfully, a codebreaker by the name of Joe Rochefort working to intercept Japanese code deciphered their plans for the attack. US forces quickly made plans to surprise the Japanese fleet and the Battle of Midway commenced (6). Thanks to Rochefort, the US was able to claim victory over the Japanese and retain Midway, turning the tide of the war. You can watch the battle on the big screen in the hit 2019 movie, Midway, starring Woody Harrelson and Patrick Wilson (7).

Another use of codes in WWII was the allies' use of the Navajo language (8). The Navajo people are a Native American tribe. The Navajo homeland spread far across the Southwest United States, covering much of modern-day Arizona and New Mexico. The Navajo are a unique people with rich heritage and a strong sense of community. As of 2021, the Navajo is listed as the largest tribe in the United States (9).

Desperate for an unbreakable code in WWII, military leaders looked to the Native American tribes that still had knowledge and use of their unique languages. The Navajo have an exceptionally unique language, making use of many sounds and phrases not found in any other language in the world. An elite team of Navajo natives were recruited to the United States military to use their unique language to communicate without fears of deciphering from the enemy (10). Other coded languages such as Enigma or our very own Rose Code, use a "key" that "unlocks" the meaning of the message. For Audrey Rose and the General, it is a series of stamps that have been assigned to letters and symbols of the English language. The Navajo language was extraordinary for allied forces because there was no "key" to the code. As a result, there was no way for enemy forces to understand what was being said freely in Navajo.

Use of homemade codes such as the Rose Code was not uncommon in WWII. Soldiers would create codes specific to their battalion or squad (11). Some used everyday objects to create coded messages, such as a box of cigarettes or the stitching of a jacket (12). One of the most unique ways that a code was transmitted during the war was in a special-issue US military card deck (13). Soldiers often had a deck of cards on their person to play in their down time. When soldiers were captured by enemy forces, they were sometimes allowed to keep a deck of cards, as the enemy saw it as a harmless item. Unbeknownst to the enemy, These special-issue cards were a hidden map of the European battlefront. When dipped in water, the cards would pull apart, revealing pieces of a map printed between the layers of the card. Once the cards were laid out in a sequential order, a map of Europe with allied safe-zones was displayed for the soldier. A map such as this could be the difference between life and death for a soldier that escaped from a POW camp.

The use of codes by Allied Forces during the war can be argued to be one of the most significant advantages that ultimately lead to victory (14). While it is unlikely that there was widespread knowledge of codes amongst all soldiers serving in the war, it is almost certain that the activities, battles, and coordination they were a part of were heavily influenced by the use of codes and code-breaking. Some codes were not known to the public for decades after the war, others may still remain a closely guarded secret. It really makes you wonder if you have ever encountered a code or item containing a code without knowing it. Who knows, maybe there’s a code in this very article. (There isn’t, don’t waste your time trying to figure one out!) Either way, we can appreciate the brilliant minds that created and deciphered all sorts of codes. Those extraordinary people probably saved the world.